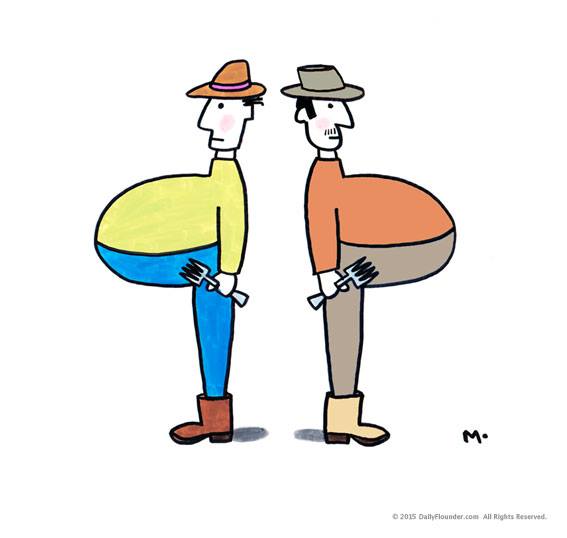 The letter from the doctor’s office said.  Well, sorta.  The letter actually said that I was selected to participate in a 7 month pilot project to “Improve Individual and Community BMI (Body Mass Index).  The idea is to shame people into loosing weight by asking patients to keep a record of their weight.

Didn’t I read someplace that BMI calculations are inaccurate, and it is a misleading measurement of a person’s fatness?  Yes, of all places, NPR, in 2006, published an article called “Top 10 Reasons Why The BMI is Bogus”

It does more than embarrass a person, BMI has been used to publicly shame school children.  Imagine what the child must feel like when they receive a letter from their school saying that they are too fat?  Especially young girls that might be self conscience about their weight and image.  What if they turn to either anorexia or bulimia?  They could damage their health by trying to stay thin, and they could even kill themselves.

What about the athlete that has larger muscle mass versus the couch potato gamer that gets no exercise?  The problem with BMI, and some adult logic, is that it is more about fat between the ears, than fat in the rears.

The NPR article goes on the say; “The BMI was introduced in the early 19th century by a Belgian named Lambert Adolphe Jacques Quetelet. He was a mathematician, not a physician. He produced the formula to give a quick and easy way to measure the degree of obesity of the general population to assist the government in allocating resources. In other words, it is a 200-year-old hack.”

But wait, we are also told that 1 in 5 children are hungry.  That there are 50 million Americans that go to bed hungry every night.  How can this be true?  The poor have many choices available to them; SNAP benefits, EBT benefits, Free School lunches, Food Banks, religious charitable organizations, and many more State and Federal programs to help feed the poor and low income people.

Forbes attempts to explain:  “Are One In Five American Children Hungry?”

First, studies of poor households show that almost half own their own homes, three quarters own a car, and almost all have a color television. The American poor seem to have money for things other than food for their children, if the one-in-five statistic is to be believed.
Second, advocacy groups (with Michelle Obama as a leading spokesperson) now appear to have decided that the problem is childhood obesity, not hunger. The children, especially of the poor, are not going to bed hungry. They are eating too much of the wrong foods.
Third, if the one-in-five statistic is correct, the public food stamps and school free lunch programs must be colossal failures.  Despite their wide reach into poor communities, they apparently leave more than thirty percent of school children “struggling with hunger.”

Maybe people just wanna eat the food they like?  When Food Tyrants like Michelle Obama and Michael Bloomberg decide to restrict your access to certain food, with the reasoning that, “we’re doing this for your own good“, you have to ask, who made them the food police?

In this day and age, we are lucky to live in such abundance.  Walk into any grocery store and there will be in excess of 50,000 products to choose from.  There are more choices now than there ever were before.  However, there are some Food Nazis that will try and govern your choices by creating a false food crisis.  They will try and ban foods based on what they perceive as not being healthy enough for you.

Remember when the Food Nazis tried to ban Foie Gras?  A centuries old practice of feeding ducks to fatten their livers using boiled corn and fat.  The mixture was then piped down the ducks throats filling their stomachs.  Animal rights kooks claimed the practice was cruel and inhumane.  Yet, domesticated ducks would gladly consume the food voluntarily.  Ducks would stand in line waiting for the farmer to feed them.  Food Nazis have always been trying to control what you can and cannot eat.  Food Nazis sense of morality is always anti-human.  The Food Nazis claim the world is over-populated and there are not enough resources to sustain the population.  If Food Nazis had their way, people would have to be eliminated to save the planet.

These are the same people that believe in global warming and condemn you as a flat earther if you do not believe in their kooky causes.  It’s always the humans fault for the weather changing.

Like I said earlier, it not so much about the body fat, but more about the fat between the extremists ears.

Give Me My GMO