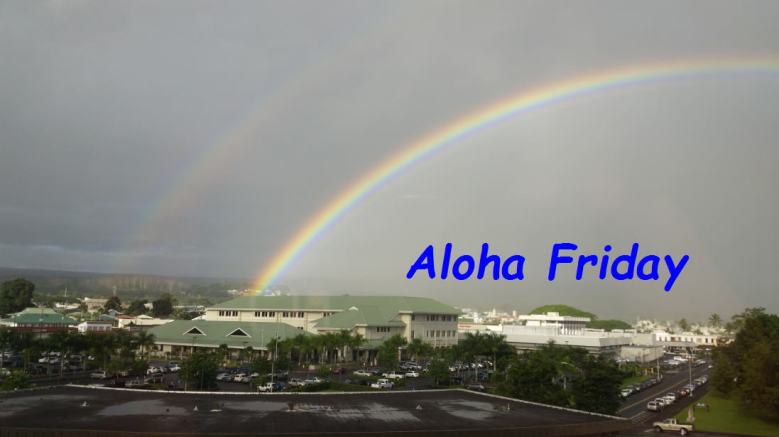 Happy Aloha Friday this July 5th, 2019. President Trump organized a spectacular Independence Day Party! The military flyovers were amazing! The crowds were overflowing and standing room only! The President’s speech was inspiring. The leftist critics were boo-hooing, gnashing their teeth, and desperately trying to protest. Idiots even burned an American Flag. The democrats looked small and impotent.

Overall, a fantastic historic event! Of course, we watched it all on TV, even the fireworks display. Truly phenomenal. A return to patriotism and national pride. Long since overdue. The fake news media refused to cover the event, but then again, who watches the MSM?

Hurricane Barbara has faded away, quickly. We’re not expecting any rain till Monday of next week. The weather here is sunny and hot. Curiously, the local media is ratcheting up the global warming alarm. Like summertime clockwork. Environmentalists are claiming rising sea levels will flood habitable areas. They claim frequent King Tides will cause more flooding and erosion.

NOAA defines King Tides as: A King Tide is a non-scientific term people often use to describe exceptionally high tides. Tides are long-period waves that roll around the planet as the ocean is “pulled” back and forth by the gravitational pull of the moon and the sun as these bodies interact with the Earth in their monthly and yearly orbits. Higher than normal tides typically occur during a new or full moon and when the Moon is at its perigee, or during specific seasons around the country.

That’s hardly the result of global warming. The fake news media then wonders why they have a credibility problem when they push the climate crisis alarm. I’m disappointed because I expected to have beachfront property by now.

Did you know that Hilo Hawai’i is the second largest city in the island chain? Honolulu being the largest, and it feels like Los Angeles whenever we’re there. Hilo has many unique attributes. Surrounded by farms and a vibrant downtown area, Hilo is small as cities go. It only takes us 10 minutes to get to the downtown area, when the traffic is light. During rush hours, the drive time can be 15-20 minutes long. The population is growing, you can tell by the amount of traffic on the roads.  In the picture above is the newly constructed Hale Hoʻokolokolo, or courthouse.

Life is good and it just keeps getting better. The weekend outlook looks good. Grillin’ and chillin’!