Barry the Bullshitter, this foul mouth ass wipe has instructed the the idiots in his regime to blame Republicans for his idea,  that he signed into law.  Barry takes no responsibility and then claims everybody has shared responsibility.  Obama is a lying sack of excrement.  If you think I’m kidding, I have proof:

During a recent hearing, Rep. Andy Harris (R-MD) confronted Dr. Tom Frieden, the Director for the Centers for Disease Control about misleading statements the White House made in regards to the impact sequestration would have on vaccines for children. The video really and truly does speak for itself.

But what can you say about low information voter?  The ignorance and vacuous stares people have when asked about the sequester; they don’t know anything?  Of course the news media doesn’t report anything about the sequester, except to parrot the lies from the purple lipped bullshitting booby in the White House.  It is disgusting!

Fact checking by other media outlets have been challenging the deliberate lies this regime has spread.  Here’s a few examples the LIES:

“You know, those Capitol janitors will not get as much overtime. I’m sure they think less pay, that they’re taking home, does hurt.” — Gene Sperling, director of the White House economic council, on ABC News’ “This Week.”

If the sequester hits, federal prosecutors will have to “let criminals go.” — President Barack Obama

“Federally assisted programs like Meals on Wheels would be able to serve 4 million fewer meals to seniors.” — White House fact sheet on the impact of sequestration

“There are literally teachers now who are getting pink slips” because of sequestration. — Education Secretary Arne Duncan on “Face the Nation.”

Janet Napolitano said that ICE won’t be able to maintain 34,000 criminal illegals in custody — not because of legal limitations on incarceration, but because of the sequester.

As a deliberate attempt to frighten people, this regime has gone out of its way to create a doomsday scenario, all the while attempting to blame Republicans.  This is despicable, and this administration should be prosecuted for crimes against the American people.

Late night talk show host and comedian, Jimmy Kimmel, put a “Man on the Street” spoof about low information voters and their thoughts about the sequester.  I don’t know whether to laugh, or cry!

Ladies and Gentlemen, we are losing our Republic.  This regime has been about lie after lie, and now they are deliberating scheming to hurt the American people, just to blame the Republicans for political gain.  This is the government you voted for!

You Get The Government You Voted For 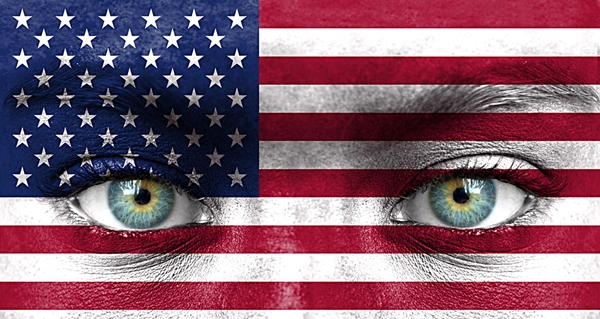 President Ronald Reagan went on to be that Great Unifier.  Working with both parties, Reagan accomplished lofty goals, created greater security, and despite liberal opposition by communist democrats, he won!  Creating decades of prosperity by limiting government, limiting regulations and rebuilding the foundation of a “Shining City on the Hill“! 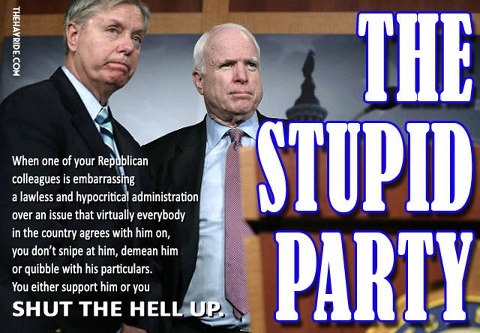 I can’t believe I voted for this idiot!

John McCain and Lindsey Graham have proven themselves to be clownish buffoons by publicly chastising Senator Rand Paul’s filibuster on the Senate floor over John Brennan CIA nomination.   Even talk show commenter Michael Medved wondered what was accomplished?  A three sentence letter from the murderous criminal Attorney General Eric Holder stating that “NO” Americans will be killed by Barry the Bullshitter’s drones without due process.  You missed the Point!

What was the purpose for Juan McLame and Lindsey Gramamnesty to publicly denounce Senator Rand Paul’s filibuster?  What was accomplished by that?  People from both sides of political spectrum were joining in with Rand Paul.  The Social Media Universe exploded with comments supporting Rand Paul.   QUESTION: Does Barry the Bullshitter’s regime have the authority to kill Americans that it deems a threat?  Senator Rand Paul shamed the regime into answering that question.

Since then, there have been a number of criticisms besides McCain and Graham’s public display of vitriol idiocy.  However, those critical of Senator Paul are missing the entire point!   This was about a spineless Republican party that has all but given up challenging this regime’s lawlessness policies.  I could care less if you either love or hate Rand Paul, that was not the point of the filibuster.

For a brief moment, there was unity, on both sides, against this corrupt criminal regime that accuses and treats Americans as terrorists.  Albeit, groups like code pinko’s and other liberals groups, that joined in supporting Senator Paul was a total surprise to me!  There were more people on both sides that agreed and were unified with Senator Rand Paul.

That’s what’s missing in this country, unity!   Barry the Bullshitter has accomplished only one objective, dividing the American people along race, class and wealth.  All the while, creating a climate of fear, envy and loathing which has divided this country since this purple lipped baboon opened his mouth about Hope and Change, and fundamentally changing America.  It was refreshing to see, because Barry’s vision of America is not the the land of opportunity and freedom.

In the end, Barry the Bullshitter’s CIA nominee John Brennan was confirmed, but not without exposing this regime’s corrupt administration policies.  That’s was whole the point of the filibuster.  #WAR Liberal Logic Will Get You Raped, Or Worse

Todd Akins and Richard Mourdock were pummeled by the liberal media and pretend to be conservatives like Karl Rove, over comments grossly taken out of context.  Admittedly, Akins  and Mourdock comments were pretty stupid, but that pales in comparison to the Liberal Logic we’re seeing in the media and government today!

Fox News’ Hannity, Democratic Strategist Zerlina Maxwell argued that in order to stop rape, we should teach men not to rape.

OK, then we should teach criminals not to commit crimes then?  Listen to Liberal Logic on parade!

Maxwell’s absurd reasoning that if you ask the rapist nicely to go away, they will!  Apparently, begging and pleading will somehow make you safer in her warped Liberal Logic mind.  Defending yourself with a firearm, well, you can’t do that!

This all started way back during the first of the GOP 2012 debates when moderator and democratic hitman George “Stephie Stephanopoulos asked about contraception rights.  Again, only Liberal Logic reasons that people have a right to contraception.  Then came that slut Sandra Fluke testifying at Nazi Piglosi’s theater of left wing whacko’s and media show.  Thus came the left’s accusation that the GOP has a War on Women.

Since then, a number of elected liberal idiots have made some outrageous claims and comments regarding rape, and how to defend against rape.  Liberal Logic says; just roll with it!  It’s just a rape!  Defend yourself by peeing your pants, use projectile vomiting, use a ball point pen, but never ever use a gun to defend yourself.  Makes sense, doesn’t it?

If you live in Colorado, where the State legislators are crafting legislation to ban all guns, they could care less about the safety of the victims of crime. No, Liberal Logic dictates that the rights of criminals come first.  The victim probably had it coming to them, Liberal Logic will reason!  That’s the attitude of these idiots that you voted into office.  This is your government protecting criminals, because only criminals will have guns.  You victims need to put on your big girl pants and just take it!

While testifying against gun control and confiscation, Amanda Collins, a rape victim, was berated by Colorado State Senator Evie Huduk, a liberal democrat and I’m assuming a woman also, said that statistics were against the victim when armed with a gun.  Which is just nonsense and was quickly rebuked as such.  Do these people hear the bullshit coming out of their mouths?

Rape victim Amanda Collins says she doesn’t know if State Senator Evie Huduk’s comments during a senate committee on gun control were more victimizing or more patronizing. Hudak, a Democrat, told Collins a gun wouldn’t have helped her when she was raped and she probably would have hurt herself.

Amanda Collins said Hudak came up to her after her outrageous comments and apologized. But Collins says she’s not really sorry for what she said. She’s just sorry about the flack she’s received from it.

If that little sparkle of Liberal Logic didn’t impress you, the listen to this bow tied moron and government pinhead, explain how to protect yourself from a rapist.  While arguing for the disarming of Colorado college students, Democratic lawmaker Joe Salazar claimed women should rely on rape whistles, not firearms for self-defense against sexual attackers or violent predators.

Did you get that ladies?  So, being raped is a “feeling” according to this moron of Liberal Logic.   You women are just to emotionally unstable and stupid.  You’ll just whip out a gun and start capping somebody in their hiney perpendicular!
This is how these Progressive Liberal Socialist Democrats think.  You cannot be trusted with a gun, you might shoot your eye out, or something.  Liberal Logic doesn’t allow for either free thinking, individual responsibility, or your Second Amendment Rights.  Liberals don’t believe in the United States Constitution.  It’s pesky document with all these rules that get in the way of running your life.
Besides, the police are there to keep you safe!  Or are they….?

James E. O’Keefe, of Project Veritas, went to the police and asked: what do I do in the meantime when I’m being threatened and waiting for the police to arrive?

Project Veritas visited police stations nationwide and asked law enforcement officials how they could protect themselves in the event of an armed break-in. “Go get some bleach. Go get ammonia,” one officer instructed. Yet another officer instructed the undercover journalist to, “lock yourself in a bedroom” and “start yelling and screaming.”

Vice President Joe Biden recently advised Americans to, “get a shotgun” for home protection. But when asked whether or not they should follow the Vice President’s advice, law enforcement officials told the undercover journalists they would be arrested for doing so.

So the police admit that they cannot be everywhere, all the time.  That there is a gap where you, the victim, will have to make a decision.  How will you defend yourself waiting for help to arrive?

What’s even more shocking is how much liberals would rather remain a victim.  So much so, they are willing to be murdered rather than defend themselves.

At a rally against gun violence at the Georgia State Capitol, one female protester — wearing an Obama hat — told WGCL-TV that using a firearm in self-defense “is not an option.”

The reporter then asked her, “But what if someone is trying to kill you?” She replied, “They’ll just have to kill me.”

That’s Liberal Logic in a Nutshell, and what a nut it is!  Liberals don’t like the idea of individual freedoms and the right to protect you life, your family and your property.  Just lay down and let the criminals have their way with you.

Liberals would rather be slaves to criminals, thugs and politicians.  Well, I guess you get the government you voted for.