So begins the political silly season in Hawai’i Nei. Where elected officials do stupid things, and political candidates make promises they know that cannot keep. Amid the distracting sign waving along the highways, and the television ads, and the mailboxes stuffed with annoying political flyers. All filed under “T” for trash. I wouldn’t mind the political competition, if it were not so dishonest.

For once, I would welcome an honest politician that would keep their promises. We finally have a President that is keeping his promises. I only wish others would follow President Trump’s example. It is refreshing when a politician reaches into their own pocket, and not the voters pockets.

Let’s start with the latest embarrassment to Hawai’i. U.S. Senator crazy Mazie Hirono. She’s up for election in 2018 midterms. She is also on several committees, which includes the Judiciary, which includes Border Security and Immigration.

Currently, there is a crisis at the southwest border of the United States with illegal immigration crossing into the United States. This is a crime. Which is why these people are called ‘Illegal Aliens’. Many of these people crossing the border are children. Some of the children are accompanied by adults, and some are not. The left has made an issue over the disposition of these children. This is where the dishonesty gets really kooky.

Dimocrats (yes, I purposely misspelled democrat), have made this a campaign issue, and are using the children as pawns. The claims that President Trump is ripping children from their families is patently false, and the Dims know it. ICE – Immigration Customs Enforcement, has no idea if the adults accompanying the children are their family.  Some of the adults were found to be sex and slave traffickers. Other’s, no one knows! So they have to be separated for their safety until it can be determined if the adults are their parents, and can be reunited.

She’s confused. Hoo Boy!  FRC’s are federal refugee holding centers where illegals are separated, and held until their status can be determined. Note that Hirono, as a child, was held in a Japanese Internment camp during World War II. Which is quite different from the FRC’s used to hold illegals aliens. Completely different. Yet, Hirono tries to make the comparison, and get corrected by the statutes in the law.

The illegal aliens were not forced into detention centers, they crossed the border and were arrested. In Hirono’s case, a democrat president, Franklin Delano Roosevelt, ordered the internment of American Japanese citizens. Emphasis, ‘American Citizens’! This is Hirono’s dishonesty when she asked the Director of Enforcement if he would send his children to FRC’s. This is what represents Hawai’i. Auwe!

Ironic, Hirono votes for the same party that interned her family and herself. Yet, she’s complaining about the compassionate treatment of illegal children and their safety.  Yet, Hirono doesn’t even understanding how the law works. Why is she even a Senator representing the State of Hawai’i. Embarrassing to the people of Hawai’i.

The rest of the Hawai’i Dim candidates, all socialists democrats, flood the TV airways with anti-Trump campaign messages. I find that amusing because they’re not running against Trump. Their promises are:

Affordable Education – economics, not in the curriculum

Living Wages – would you like fries with your $20 Big Mac?

Leftist Dims never explain how they will pay for all this “Free Stuff”! No worries, “Democratic Socialist” will find the way. Just like Venezuela.

This madness can all go away Hawai’i, Vote Conservative

It’s a great name for the active fissure that continues to pour lava into the ocean from Leilani Estates. It literally means ‘Fissure Eight’.

Currently, Fissure eight splatter cone is over 180 feet high. To put that in perspective, Aloha Tower is 184 feet tall, that’s ten stories high. The eruption has destroyed over 600 homes since May 3, 2018.

There are Twenty-Four fissures that have opened up in Leilani Estates. Only one continues to erupting rivers of molten lava at an astonishing rate that swallowed several subdivisions in the Kapoho area in lower Puna district. All the fissures did erupt lava, but eventually either slowed or stopped. Only fissure eight continues to be very active. Fissure eight continues to flow lava that have reached the ocean. The amount of lava has created its own weather system. A deadly system that includes poisonous hydrogen-sulfide gas, clouds of LAZE.

Laze — a combination of the words lava and haze — is the product of a chemical reaction that happens when molten, 2,140-degree-Fahrenheit lava hits the ocean. The sea water gets boiled, creating a messy mix of hydrochloric acid, steam, and tiny glass particles.

While this is of great concern for residents of lower Puna, a greater concern is looming some 20 miles away at the Kilauea caldera. As the caldera continues to sink into the crater, there is a concern that the lava and the underground water-table will combine. If that happens, it will cause a huge explosion, with huge rocks projectiles as large as cars sent for miles. A plume of hydrochloric acid will ascend thousands of feet into the atmosphere.

Since the beginning of May, 2018, when the fissures appeared, the floor of the Kilauea caldera has been sinking, daily. Each event has produced a 5.3 magnitude earthquake around the Volcano area. Earthquakes powerful enough to damage buildings, roads, and the surrounding village homes.

Geologists have warned that this explosive event could cause a very large earthquake that could cause a major Tsunami. Also a land slide from the lower rift into the ocean. The last time something like this happened, in 1975 when a magnitude 7.7 earthquake occurred, the Kapoho tide pools were created. It cause the ground in the Kapoho area to sink into the ocean. Today, the Kapoho tide ponds are no more. They have been reclaimed by Madam Tutu Pele. The area is now all black Pāhoehoe (smooth lava) and ʻĀʻā (rough lava). Both the ocean life and land vegetation is dead. All that remains, is newly formed land by lava. This is what the tide pools used to look like.

This was one of the hidden gems in Hawai’i. Warm tide pools where shallow enough to wander out. You could see little fish and shrimps scrambling around. It was peaceful and calm. You could either sit on the rocks, or in the tide pools. Eventually, this all will return, when Madam Tutu Pele decides to rest.

I don’t know which is worse. The fact that people who have either lost their homes to the lava, or the people that are robbing and vandalizing home of evacuees. These cock-a-roaches that steal from homeowners are truly disgusting and I hope they get caught. It is a felony if they are caught.

Meanwhile, we have must be ready to evacuate at a moments notice. We worry about the direction of the trade-winds, and if VOG and Pele’s Hair should appear (Pele’s Hair – fine threads of volcanic glass, formed when a spray of lava droplets cools rapidly in the air.) It looks like hair, but it’s glass and sharp. You don’t want to breathe that stuff in. So much for life on a volcano.

A phenomenon is sweeping the nation. As first, I wasn’t sure if this was true, but now I believe people are finally waking up. As Americans, we have a natural bond as the tenants in common with our Constitution.  As a country of laws, we have an equal responsibility to protect the trinity of Life, Liberty and Freedom. It’s seems that leftist liberals don’t believe a certain class of Americans deserve the same Constitutional freedoms as they are afforded. Sounds like discrimination!

I often hear liberals accuse conservatives of being racists. The liberals present no evidence, except for manufactured evidence designed by themselves and repeated by the fake news media.  By the media, I mean the Big 3 Networks (ABC, CBS, NBC) and the cable networks (CNN, MSNBC, HNL), and the print media (NY Times, WaPo, HuffPo, etc.) All of these news networks are run by liberals. Pure authoritarianism.  Pure misinformation.

When a leftist disagrees with your argument, they immediately try to shut you down by accusing you of being a racist. A Nazi, A Supremacist. The argument is immediately shut down with shouts, violence, and intimidation.

Civic chaos is the democrat new battle cry. Barry the BS’er started it all. Mad Maxine Waters has been encouraging her low IQ followers to commit acts of violence against supporters of President Trump. The left as a whole is not interested in robust debate, instead, they have chosen to shutdown debate ‘by any means necessary’. If they involved violence, so be it. Some quotes from the Bullshitter in Chief, Hussein.

Just how violent is the left? Very! The media doesn’t report it. It’s not news worthy, because the violence happened to conservatives. Here’s a list.

This is just the short list. There are events that continue today. Again, these acts of violence are rarely reported by the Fake News Media.

Now, dims are using Jesus Christ as an argument. They claim Jesus was a socialist. This is the same party that voted God out of their party. Now the dims are misquoting Jesus Christ. Even Christian Judges are given a religious test by congressional bigots, Dianne Feinstein, Dick Durbin, and others that are claiming religious dogma will determine their rulings. When Christian Judges records, and writings, suggest strict adherence to Constitutional Rule of Law. What the dims want is a emotional interpretation of the law. That just dilutes the law into multiple interpretations. What is certain, is that the left, democrats, progressives, what ever they call themselves, are embracing socialism. Apparently the lessons of Cuba, Venezuela, China, North Korea, and other pseudo socialist countries, fall on deaf ears and closed minds. These countries put up walls to keep people in, not to keep people out.

As for open borders… 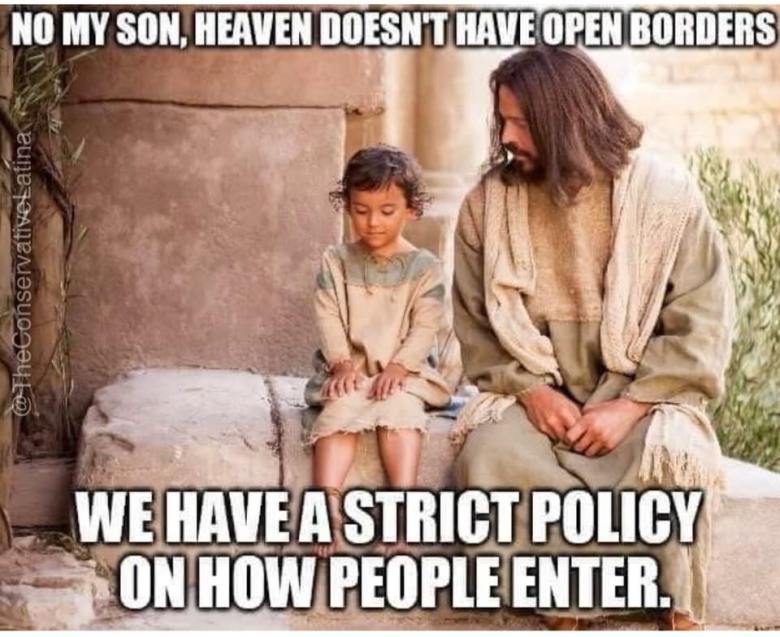 But Hell Has Open Borders

Fortunate to be living in the Greatest Country in the world.