A petty, angry, small little man. That’s who John McCain was. A over-privileged Navy brat that was protected by his father, and grandfather, whenever he screwed up. Juan McLame was a huge screw-up. I cannot believe how much the leftist media adores this creep. Except, the leftist media always adores their own. He was a “Republican In Name Only” (RINO). He called himself a maverick, he was more manure. 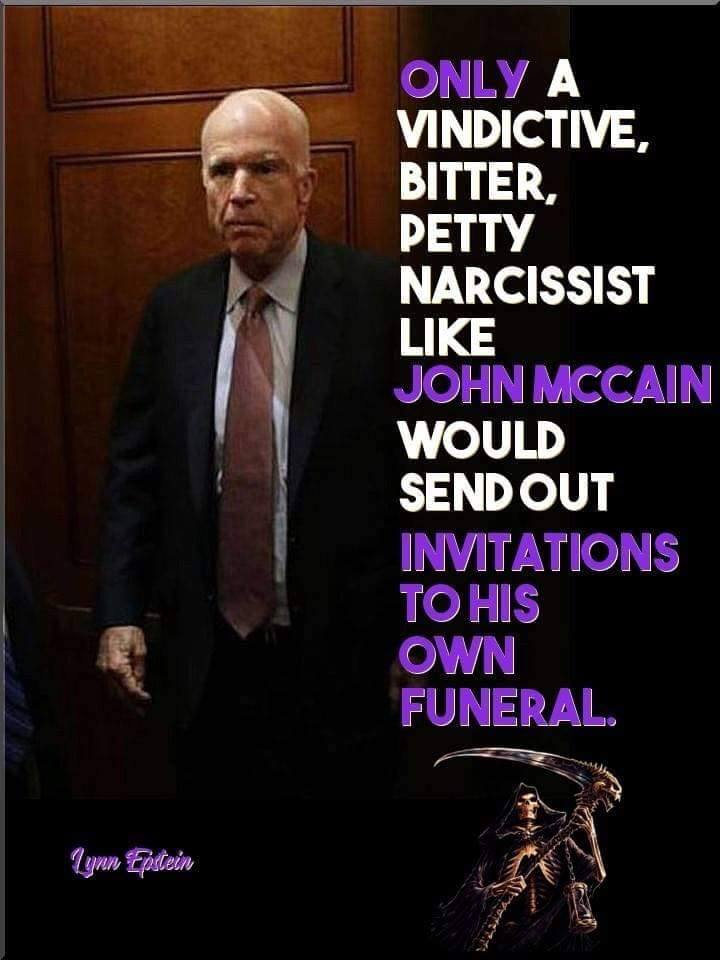 NOT TRUMP – HE’S NOT INVITED

Irregardless of his military service, he was no hero. On July 29, 1967, the spoiled brat McCain pulled a prank and wet started his jet aboard the USS Forrestal flight deck. That cause a bomb to explode on the jet behind him, which caused a cascade of bombs exploding on the carrier. Instead of helping his crew mates, he took off. The fire and explosions caused the deaths of 134 sailors. The media rarely reports this catastrophe that he causes. He should have been court-martial, but because his father and grandfather were Navy admirals, he was protected. What can you expect from this moron that finished at the bottom of the Navy academy.

In all disclosure, I voted for McCain, only because he was the lesser of a greater evil, Barry the BS’er Obama. I’ll explain in detail below.

When McCain returned from Vietnam, his then wife was injured in a automobile accident. McCain divorced her to marry a rich socialite, to start his political career.  Proving that McCain was a heartless scumbag.

McCain spited President Trump when, at the 11th hour, when he entered the Senate to give a big thumbs down on repealing Obamacare. 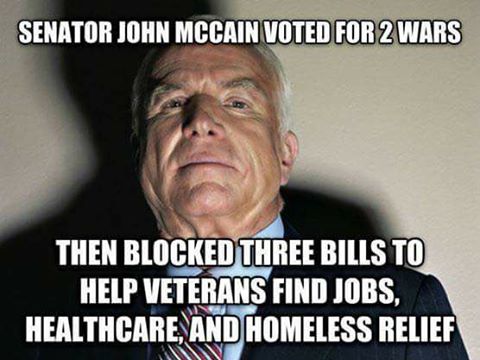 McCain’s political career proved he could be bought and paid for. He was a Globalists with ties to George Soros. McCain didn’t care for his fellow veterans. He did nothing when they were dying in hospitals in his home State of Arizona. McCain’s used his influence to stroke his ego, and used his time as a POW to shield himself from other crimes.

McCain was deeply involved in the Saving and Loan crisis, also known as the Keating 5. Charlie Keating was a wealthy conman. He used his influence to pour thousands of dollars into McCain political campaign for political favors. Thousands of investors were defrauded and lost  their life savings due to the corruption at a cost of 3.5 billion to the taxpayers.  The Senate ethics rules that McCain used “poor judgement”. Does that sound familiar? Guess who else was found to have used poor judgement, and got away with it?

It seems the well connected in Congress can use their money and influence to get out of any crime. McCain supported ISIS terrorists and wanted us to start another war in Syria, which might have lead to World War III. McCain was not a ‘maverick.’ He was an establishment war-mongering stooge and enabler for the Deep State.  McCain convinced the Obama regime, and then Secretary of State Hillary Clinton, to send arms to ISIS claiming they were freedom fighters. How well did that turn out?

McCain leaked Hillary’s paid-for pack of lies, the Steele Dossier, to FBI James Comey, in an attempt to criminally frame President Trump. This is the legacy of this scumbag. McCain’s revenge for being rejected twice by the American people when he ran for Presidency. When McCain ran against Barry the BS’er, he defended Obama, often. When McCain’s campaign was spinning wheels in the dirt, he nominated Sarah Palin as his running mate. His campaign suddenly gained enormous popularity. Sarah Palin was a Star! Not because she was a rich, bloated, congressman, who’s time was declining, but because she represented the working class people.  A working mom, with a autistic child, with everyday problems that all Americans can relate. McCain’s vindictive presence, and his traitorous staff, allowed the leftist fake news media to tear apart the Palin family. McCain threw Sarah Palin under the bus. Loyalty only McCain can abuse. McCain was a repulsive worm, and I’m glad he’s dead.

GOOD BYE TO PART OF THE DEEP STATE

In 1959, Hawai’i became the 50th State in the United States of America. A Constitutional Republic that welcomed the Land of Aloha into the Greatest Country in the world. The great experiment that started 242 years ago. It was, and still is, the the greatest historical event in the history of Hawai’i.

Prince Jonah Kuhio Kalaniana’ole, introduced bills for Hawaiian statehood as early as 1919. At that time, Hawai’i was a US Territory, and Prince Kuhio was a non-voting delegate representing Hawai’i in Congress. President Dwight D. Eisenhower signed a proclamation making Hawaii the 50th state in 1959.  Many Hawaiians embrace being American Citizens, as do I.

The Hawaiian culture includes the native Kanaka Maoli, but also other cultures around the world: Portuguese, Chinese, Japanese, Mexican, Russian, Dutch, Scottish, English, Samoan, Micronesian, and others.  Many were in the Monarchy of the Hawaiian Kingdom under King Kamehameha. There are generations of families that have worked the land, farmed, built the cities, run the government, and what they all have in common is the Aloha Spirit.

Of course, nothing is idyllic and perfect. Hawai’i does have its problems. Our government is a single party system. Mostly leftist democrat socialists that have turned the State into a huge welfare state. A homeless problem that is growing. Cost of living prevents low income families from affordable homes. A crushing tax burden. Dominate Unions that drive legislators by campaign money. Corruption that spawns from an unbalanced, and unfair, electoral system that draws less than 50% voter participation. Why? Because many people believe they no longer have a voice in their government.

Unfortunately, this is the reality of paradise. Leftist transplants have changed the political landscape since the 1960’s. These are the hippies, and socialists, that eventually entered public office. They campaigned on socialist programs such as government welfare, subsidizing housing, free healthcare, and taxing the rich, as the method to pay for it all. It’s very sad, but we are doing what we can to bring fiscal sanity and responsible government.

This could be the new seal of the State of Hawai’i, but I’m being too critical. I love living here despite the problems we have. I’ve lived in far worse places in my life, so I don’t want to disparage the one place where I live, and love.  The greater good far outweighs the bad.

Friday, August 17th, 2018 : Is Admissions Day. A special day where spontaneous Hula will break out. Celebrations will take place. People will rejoice in being Americans. I will enjoy living in the United States, in Hawai’i, and being positive of the future. The United States is our ‘Ohana, our family, and our ho’oaloha (friends). We are unique in so many ways. 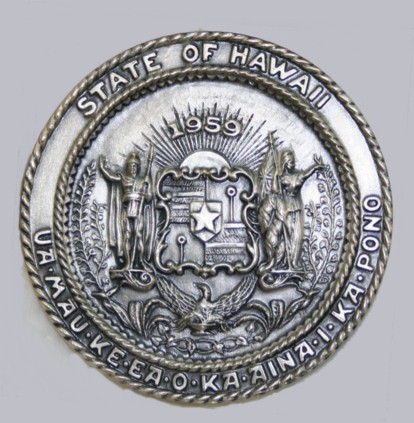 Brian Snotzs, a leftist bigot, much like crazy Mazie Hirono. Uninformed, unenlightened, narrow minded, Snotzs doesn’t impress me as worthy of being a Senator in Hawai’i. These are Hawai’i’s elected embarrassments. In the case of Snotzs, he was originally appointed. They are suppose to represent these Island’s in Congress, but what they really represent, is only themselves, and their path to power. This haole is a real whacko! If he’s not hosting global warming congressional pajama parties, he’s pushing to have Hawai’i populated with people that hate the aloha noho ʻana (way of life). The Washington D.C. cocktail parties are just to important, than the needs of the people of Hawai’i Nei are second.

Snotz commented on Trump’s Florida rally saying it was a “dark carnival”. It insults average Americans that voted for President Trump. It confirms the hatred and bias the Dims like Snotzs have for local people. As for Snotzs claim that leftists are not out of their minds, here are some glaring examples that prove leftists are insane:

Kathy Griffin held a bloody “beheaded” Trump bust. Snoop Dogg pretended to shoot a Trump figure and rapped about killing the president in a video. A “Saturday Night Live” writer predicted that the president’s 11-year-old son would be “this country’s first homeschool shooter.”

Samantha Bee called the first daughter a “c**t” with absolutely no remorse. A Bernie Sanders supporter targeted GOP members of Congress in a shooting. A Democratic congressional candidate called the first lady a “whore.”

Multiple members of the administration have gotten harassed, shouted down, or kicked out of restaurants just for working for the president. Multiple people have made death threats against the families of administration officials, including Federal Communications Commission Chairman Ajit Pai.

A man stole a teenager’s MAGA hat and threw a drink on him. Maxine Waters said Trump officials are “not welcome anymore, anywhere.” Left-wing Antifa members have harassed Trump supporters.

The media released names, and addresses, of ICE and other law enforcement people, including their families children as targets of leftist harassment. Some first responders received death threats against their families.

Dark carnival is a term of dismissing the local people over foreign special interests. Healthcare and climate change are just talking points. Democrat socialists will punish working class people, in favor of globalist policies that will hurt the island economics. That’s why they cannot retain and keep healthcare workers, and teachers. They over-regulate these industries to the point of unaffordable living.

Brian Snotzs obviously dismisses the violence he, and his party, encourages against average Americans. Snotzs fights for illegal aliens, and not for the citizens of Hawai’i. Snotzs would never get the crowds that President Trump draws. Neither would Snotzs get the respect that the President gets. Snotzs promotes the plantation class warfare. Favoring big money special interests, and doing nothing for low income families in these islands. Auwe!